I have been painting some stuff recently, it's just been slow progress.

Here are my last updates.

Kayn Somos and the Heavy Stormtroopers 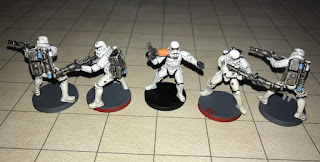 Kayn Somos again, with a new squad of Stormtroopers.

Rebel Troopers ready for deployment against the forces of the Empire. 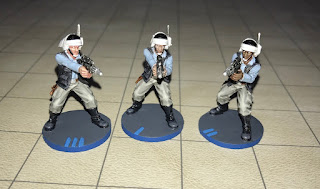 Kayn and the Heavy Stormtroopers will get used a lot in the Twin Shadows mini campaign, then only be used in Open Groups after that. The new squad of Stormtroopers will be usable in a lot of missions if we want to use them instead of one of the other squads, same stats, different sculpt.

The problem with the Rebel Troopers is they are used in a single mission, and that's only a side mission that randomly might be in the campaign, and then only maybe will come out. Sad that the chances of them being used is really really low.

Next up I will be working on the Bantha and the Tusken Raiders, the raiders will be used in a few missions, but the Bantha is like the Rebel Troopers, used in only a single mission, that is unlikely to ever be seen; and it's going to take me 20+ hours to paint as I am not a fast painter.

Sad that so much work will likely never be seen on the table.

But I did spend 3 hours giving a Bantha a manicure this morning, so there's that. I will be able to start painting next week when I get home.
Posted by Bremic_aus at 4:55 PM