Flash Point: Fire Rescue is probably my favourite introductory co-op game. It's also the one that I think is the most thematic game because everyone gets what is going on. You can play it with 6 year olds, or 80 year olds. And I have. If there was any game I wanted to give a good treatment to it was this one.

It has taken me over half a year to finish this project, though the last half has only taken me three weeks. It's amazing what you can do when you just sit down and focus. Even painting only 30 minutes every other day, I finished the last seven pretty quickly.

Each of the roles in Flash Point brings their own feel to the board, and I wanted to try to reflect that in their paint jobs. The trick is the figures don't match the art on the cards, not remotely. To the point there was some argument as to what figure represented which card. I have come up with my own colour schemes to try to make it work for me. Some of them are too simple, others too complex. But I think they will look great on the table. 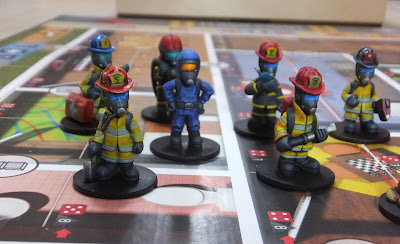 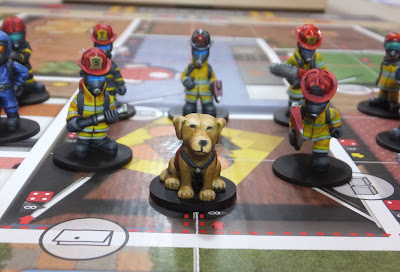 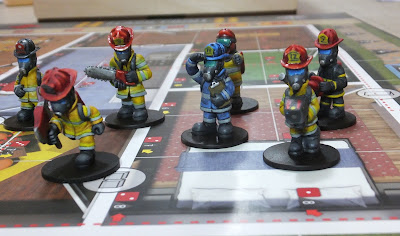 Each figure has a tank colour that tries to represent their basic role. FIghting fire, support, leadership. I changed it a few times in order to stay closer to the art, or for artistic purposes. It's my game, and I can do what I want. None of these figures are going to have to actually meet a uniform code. 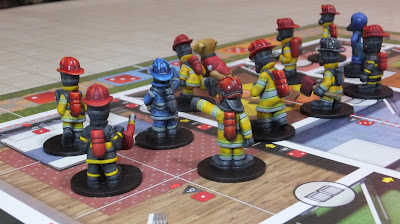 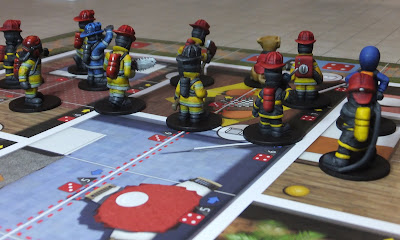 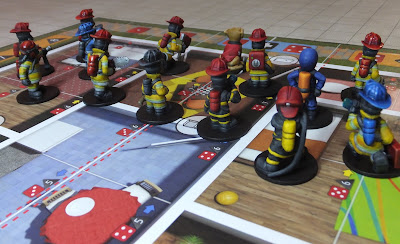 So there is my team, ready to face whatever challenge that comes. Ready to rush into the flames and rescue the helpless (and often stupid) Points of Interest that reside in the dangerous situations they find themselves in. All hail the heroes.

One final touch I had to add, though I had a lot of trouble taking a photo of it. For some of the figures where the uniform matched. The artwork for many of them shows them wearing Hi-Vis with reflector strips. So I had to paint them on. It's not really visible under normal light, and I can't imagine ever playing under UV light, but if my heroes ever find themselves in a situation where they need that extra visibility in low light conditions, they are ready.

As always I hope you like the figures.
Posted by Bremic_aus at 9:45 AM