As those of you who know me will know, I am very keen in pimping out my game storage - and this is also true for Imperial Assault.

I have put a lot of time (am I mean dozen of hours) into trying to plan my storage for Imperial Assault, including being able to make room for the expansions and extra minis as they come out. There are some beautiful solutions for storing IA in the base box, but I have seen with other games that these fall apart quickly when expansions come out, and the first expansion and extra waves of minis have already been announced.

So how was I going to store this?

Well, for the main game I have bought a large plastic tub that I think is a good size and I have started making foam core mini trays (which I will post about when I have them ready).

What I wanted to share in this post is the solution I came up with for the card storage for the two sized cards in premium sleeves.

First I thought I would make them out of foam core like I have for other boxes, but I wanted to look for something simpler and more robust. I then bought a plastic tub that would hold them, but the modifications that would need to be made were too complex.

Then I looked at the sizing of CCG storage boxes and how I could modify those - especially for the small cards. They would work, but I would need to put a centre partition in. So I did.

These are the photos of the finished product - minus the dividers which I haven't printed yet. 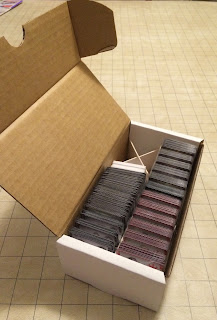 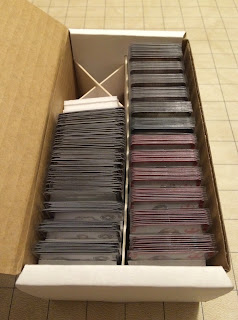 I cut slots in the card box for a central partition, then cut a piece of 1.5mm card stock to the right size and slotted it in. It holds well and the cards fit - except for one issue. The box is only just the right depth for the cards, with no room for dividers - so how was I going to put label dividers in?

Well the solution I am using is to have a piece of foam core between the different types of cards, and then the dividers when printed and laminated will go behind those and the gaps will make the labels readable. This is the next step.

For the large cards, just using the CCG box without modification works fine, so that was easy. All that's left is to print and laminate the labels. 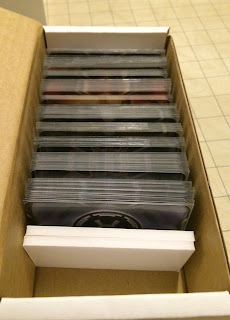 Because these are white cardboard boxes, I will be able to decal them or label them how I want, so printing out movie images with text or something will be easy.

Anyway, I thought people might be interested in how, after dozens of hours, I finally decided to store my cards for Imperial Assault - and how I will probably end up storing Descent as well.